The Elite Circle, The Light

NOTICE: If you have found this page in search of information on this character in the Calamity Mod canon, please note that the following is for a fanmade roleplay, and is therefore not accurate to said canon. Everything said here should be disregarded in terms of canon info regarding this character. If you want info on the official character, you should check out the official Calamity Mod wiki or the Calamity Mod Discord server. Thank you for your understanding and have a nice day.

"I'm simply trying to point out your faults. As much as I wish for you to succeed, I feel it is important to learn from one's mistakes, a skill, which, you, my lord, unfortunately seem to lack." ― Yharon

Yharon is a titanic divine Jungle Dragon, and is the last of his kind. He prides himself for being Yharim's eternal companion and only true friend.

The last Dragon remaining on Terraria, and the Tyrant's only friend. The inborn Yharon was given to the young Yharim as a gift from his mother, a memento of her many travels. No matter how many times he asked his mother about her travels across the world, she would always dismiss his questions with "you'll understand when you're older". The egg was special to him because it was the only proof of her travels, at least, to him. It was what convinced him to be just like his mother when he grew up. Unfortunately, that wish was short-lasted.

As Yharim's older brother began to partake in questionable acts, the current Jungle Tyrant saw his family as a threat to the Jungle Order, and had his family thrown into lava. Yharim survived only because the egg had miraculously hatched the second it felt the immense heat of the lava, managing to rescue the charred, furious, and barely alive Yharim, taking him to safety. From that point on, the duo lived in hiding as Yharim grew older and stronger, awaiting the right moment to murder the stubborn Jungle Council and take their place as dictator. Yharon, not being wanted dead by the Council, was able to roam the jungle and gather the necessary food and equipment for his young master. At 25 years old, Yharim demanded he was ready, went faced the Council, and killed every last member by creating a shockwave that shook the planet, breaking his arms in the process. When he claimed the throne, the first action he did was appointing Yharon as his first Council member.

For the next two-thousand years, Yharon would mostly watch his master's accomplishments from his side, and familiarizing himself with every new council member the Tyrant appointed. When Yharim eventually commenced the project to clone Yharon, the Dragon watched in interest as his "clones" were produced, finding them adorable and demanding to take care of some of them. Since there were no objections, he did so, and has been doing so ever since, as his one responsibility.

Yharon's only appearance in Arc 1 was in Calamitas's vision, which was later retconned.

Yharon has no known weaknesses at the moment

Being little more than a pet, Yharon does not have many personal desires or goals. He does, however, take pride in the fact that he is the only being Yharim trusts with his life. Despite this, he occasionally feels lonely, as he is currently the last of his kind. Despite his position, Yharon is kind-hearted, and will only attack other creatures if he sees them as a threat to him, his master, or the Dragonfolly. Although, as he master has become increasingly depressed, some of this has rubbed off on him, and Yharon has begun to feel and understand the struggle his master is currently in.

The Devourer of Gods 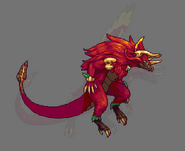 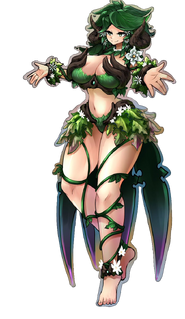